How did Tom Wright use a membranous façade to save The Burj Al Arab from becoming a 321m high oven? 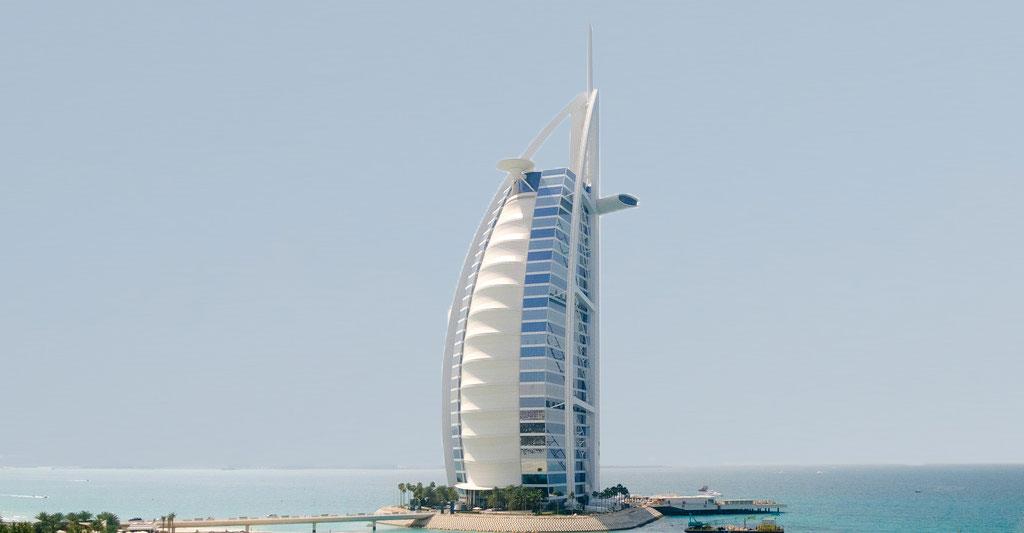 Standing tall at a height of 321 meters on a private artificial island, The Burj Al Arab opened its door for the public on 1st December 1999. Just 3 meters short of the Eiffel Tower, The Burj Al Arab is currently the 5th tallest hotel on this planet and undeniably one of the most luxurious.

Building this luxurious hotel was the solution proposed by HH Mohammed bin Rashid Al Maktoum to confront the economic time bomb Dubai was facing in the late ’80s.

“He knew that the oil reserves are going to get depleted one day and he had two choices. Either go and do something about it and find other alternative ways to sustain or sit waiting for help.” – Sultan Bin Sulayeem, Adviser to Sheikh Muhammed

Facing future economic meltdown, Sheikh Mohammed made a crucial decision to turn his country where beaches & sand were abundant into a most exclusive holiday destination on the Arabian Gulf coast.

Sheikh Muhammed knew that he needed a luxurious centrepiece to launch his country into a high-end tourism hub. He wanted a structure that could be an epitome of luxury and an icon of Dubai rather than just another star hotel.

Why was designing the Burj Al Arab a tough row to hoe for Tom and his team?

Lying on their beds during those sleepless nights, Tom & his team at WS Atkins knew that they had to come up with something revolutionary, something that could be a tribute to a visionary nation of the 20th century.

“The client desired a structure that was and would always be synonymous with the country. As fishing has always been an important trade, Burj Al Arab was built to resemble the sail of a dhow, a type of Arabian vessel” – Tom Wright

It wasn’t until one evening when they were sipping beer on a beach and saw a modern sailing yacht, Tom had his eureka moment.

He realized that a building in the shape of a modern yacht sail could jog up one’s memory about the seafaring heritage of Dubai and could reflect Dubai’s maritime heritage and leap into the future.

Challenges of having the world’s largest atrium in Dubai

In a place like Dubai, where incident solar energy can heat the place up to 50 degree Celsius The 18 storied atrium between the V-shaped floor plan did pose 2 major challenges to the engineers;

The solution lied in making the world’s largest cloth wall which could give the insiders protection from the scorching desert sun while providing sufficient illumination inside the atrium.

Using a Membranous material to replace the glass infill was the simplest solution they could have as they wouldn’t have to spend a penny more on Façade Detailing or designing.

Why did the engineers use a membranous material made out of PTFE glass fibre instead of a cloth wall?

Instead of making a huge cloth wall, the engineers used a membranous material made out of PTFE (Polytetrafluoroethylene) glass fibres for the following reasons

How did the engineers keep the incident heat to a minimum inside the atrium without compromising on luminance?

The 18 storied atrium is enclosed by 12 individually tensioned two-layer membrane panels form the north facing façade. These membranous material made out of PTFE glass fibres allows less than 10% of the light to pass through them maintaining an optimum temperature inside the atrium and providing sufficient illuminance.

The double-layered membrane allows white light to pass through but avoids overheating the interior, using the method of cooling by direct loss.

The heat energy that passes the first cloth is removed by a flow of air between the two, minimizing the energy gain for such guidance. Then the central hall is cooled by evaporation of water from the pits, dropping the feeling of enclosure.

In the evening the translucent PTFE glass fibre facade becomes a gigantic projection screen creating a visual spectacle both outside and in the interior space.

The end result of this innovative engineering and architecture was the iconic sail-shaped silhouette of Burj Al Arab, the beacon of modern Dubai.

“A building becomes iconic when its form is simple and unique. If you can draw a building with a few sweeps of the pen and everyone recognizes not only the structure but also associates it with a place on earth, you have gone a long way towards creating something iconic” – Tom Wright

K. Shakti Prasad is a content writer with 3+ years of experience currently working at Advenser Engineering Services. He is a graduate in Electrical Engineering with a vehement passion for writing. Apart from being a BIM enthusiast, he has a great interest in music and literature. He is someone who is addicted to the stillness in traveling, making him a discontent vagrant who is in his quest for finding peace!